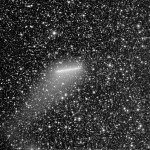 A comet discovered in 2009 by Australian amateur astronomer Gordon Garradd is currently visible from the UK in the morning sky. It is currently around magnitude 7 and can be seen with binoculars that have at least 10x magnification. The object is quite small so a medium sized telescope and fairly dark skies are needed for good views.

The comet is moving through Hercules close to the keystone asterism. It passes by the head of Draco in February. The chart below shows its movment during January and February 2012.

It is sporting a short tail now which is showing up nicely in recent images. The brightness won’t change much over the coming couple of months so there is plenty of opportunity to observe and image the comet.

Comet Garradd reaches peak brightness in February when it should be at around 6th magnitude. If you have really dark skies it could just be visible to the unaided eye around this time. The comet’s closest approach to Earth happens in March when it will be close to Ursa Minor and should still be around magnitude 7.

This entry was posted in What's Up. Bookmark the permalink.